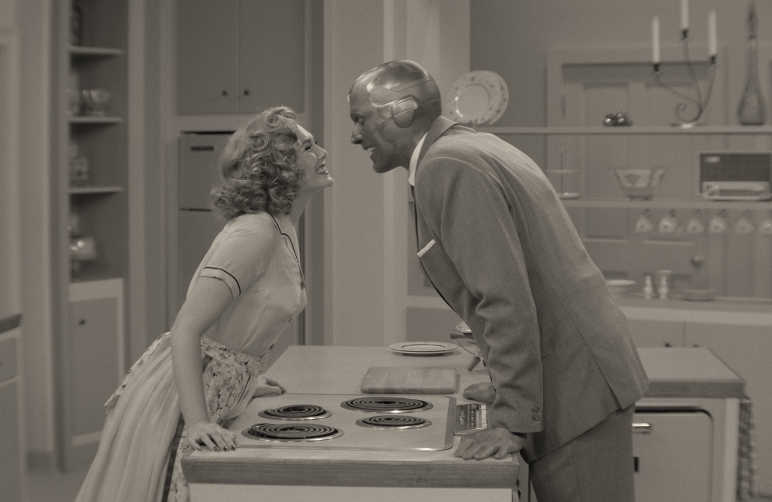 After the events of Avengers: Endgame, Wanda Maximoff and Vision have created a new life in the suburbs, working to hide their powers from their neighbors- but this new life isn’t as picturesque as it may seem. Elizabeth Olsen and Paul Bettany reprise their roles from the Avengers films in the first ever Disney+ partnered series, beginning a new phase of Marvel entertainment.

In a brief introduction, President of Marvel Studios Kevin Feige expressed his excitement for the show and for the future of Marvel/Disney projects, saying WandaVision “is the perfect entry of the MCU on Disney+.” As for why they chose the beloved superhero couple to begin Phase 4 on television, he says “It’s a story we could not have done as a feature.”

One of the aching questions from fans is how Vision returns from his death shown in the final chapters of the Avengers franchise, but Bettany explains he had no idea he would be returning to another Marvel project. “After Endgame I thought I was dead, and I got a phone call from Kevin (Feige) to come into the office, and I thought ‘I’m going to get the can’. I came in and I was like ‘it’s been a great ride thank you guys’, and then they said ‘wait’ and they pitched the show. It was so utterly insane, I was in from that moment on.”

Besides the return of stars Olsen and Bettany, newcomers Teyonah Parris and Kathryn Hahn will be joining the series as Monica Rambeau and friendly neighbor Agnes. Since Rambeau is a fictional character already established in the world of Marvel, Parris had to do her homework reading the comics- though she expressed her gratitude to the creative team for allowing her to take liberties in building up her personality. Hahn joked that being able to wear wigs is a dream for her, but also expressed her excitement “to be in something that combines all these different genres… and couple that with real depth and complexity with these two incredible actors at the helm.”

Some familiar faces will also be returning to the series from past Marvel projects, Kat Dennings as Darcy Lewis (Thor) and Randall Park as Jimmy Woo (Ant-Man and the Wasp). When asked about how her character has developed, Dennings said she thinks “Darcy has kind of learned how to be a boss. She comes to the world of WandaVision under some unusual circumstances… it’s hard to talk about it without any spoilers. She does wear some interesting costumes though.” Park teased the connection between each of the characters, explaining that Marvel fans will be pleasantly surprised with how WandaVision fits into the rest of the MCU. “There is all this talk about the Marvel universe expanding, and it does so very much if not tenfold on this show. I’ll just say that.”