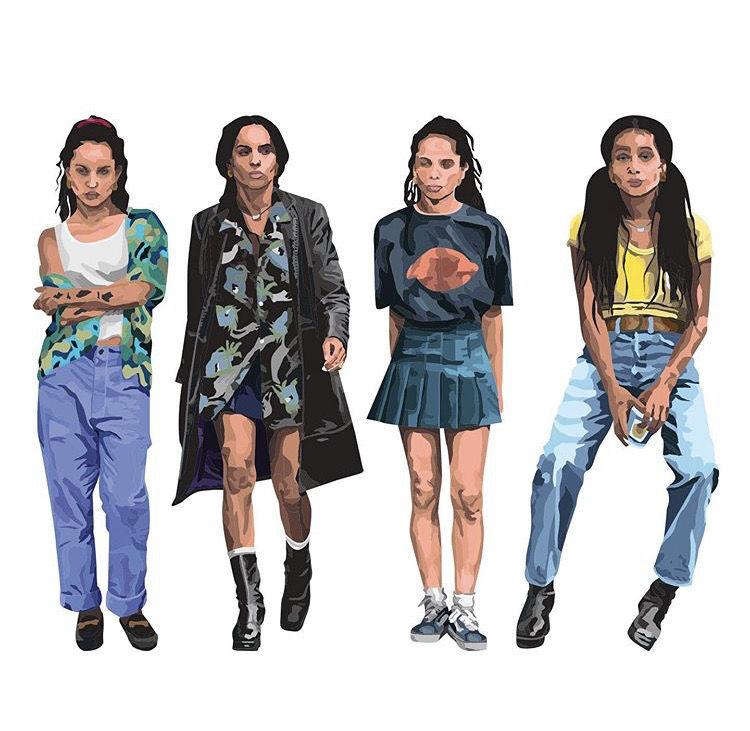 After seeing a teaser trailer for High Fidelity, I had been excitedly anticipating this show for about a month before it finally came out on February 14th. And let me tell you with absolute certainty: I wasn’t disappointed. High Fidelity, one of Hulu’s newer releases, is a show that follows Rob (Zoe Kravitz), a New York City record store owner as she attempts to process her top five heart breaks and get over the love of her life through music, friendship, and a lot of list-making. The show is based off of Nick Hornby’s 1995 novel of the same name and takes a different spin on the book than the 2000 film, also called High Fidelity, starring John Cusack as Rob.

Set in present-day Crown Heights, Brooklyn, twenty-something, effortlessly cool Rob owns a record store that is beginning to struggle in the face of digital music streaming. The show begins with Rob, short for Robin, dealing with a recent breakup with her fiance Mack (Kingsley Ben-Adir). Despite the advice and concerns of her best friends and coworkers Cherise (Da’Vine Joy Randolph) and Simon (David H. Holmes), the breakup leads Rob to reflect on her top 5 heartbreaks of all time and seek out closure in each relationship by tracking down her exes and asking them why their relationship failed.

Being a remake of an adaptation, the show was immediately up for ridicule by fans of both the novel and the original film. And though the fact that the more the series progresses the farther it strays from the original story disappointed some viewers, the show’s revival also made some very important changes to the series. Unlike the story’s original protagonist, Zoe Kravitz’s iteration of Rob is a bisexual woman of color which, needless to say, is important and priceless representation that both the novel and original film adaptation were missing. Furthermore, Simon is gay and Cherise is a black woman, which are both factors that were missing from the originals. One episode even ejects Rob from the show’s driver’s seat completely and replaces her with Simon, who is able to tell the story of his many breakups with his first boyfriend after he came out as gay. Rob’s race and sexuality are both extremely important changes that High Fidelity’s showrunners decided to make especially because she’s a woman in the music industry, which has historically been ruled by the white male perspective.

Most of Rob’s romantic flings and run-ins, however, closely mirror those seen in the original iterations of the story, including one with a famous rock musician. (Fun Fact: the rock musician that John Cusack’s Rob hooked up with in the film was played by Lisa Bonet, Zoe Kravitz’s mother.) A lot of the witty jokes and dialogue that makes the show so great are also identical to that heard/read in the film and novel. And Rob’s basic character traits are consistent throughout all iterations: flakey, untruthful, afraid of commitment, and sometimes chronically self-centered. But despite these seemingly unlikeable qualities, Rob was a character I couldn’t help but root for. Maybe it was that I saw some of my own qualities in hers, maybe it was that I related to some of her struggles, but I think what really sold me on Rob was her soliloquies.

As a writer I was always taught that utilizing character voice overs and relying on soliloquies in script writing was lazy writing; that if you couldn’t show instead of tell it wasn’t worth including in the stories. But without many of Rob’s witty asides and scenes where she speaks directly to the viewers, she would be a much less likeable character. Insight into Rob’s thought processes, and hearing why she makes the choices she does straight from the horse’s mouth, allows the audience to sympathize with her and get context and stories from her past that we would never be able to get otherwise.

Needless to say, I adored (and flew through) this series and am eager to know if it’ll get picked up for a second season. Despite some unlikeable characters and moments that make you want to scream “WHY WOULD YOU DO THAT” High Fidelity is a series that features a lot of crucial representation that previous iterations of the narrative have been missing and, because of that, likely lands better with today’s more tolerant, diverse, and accepting audiences.