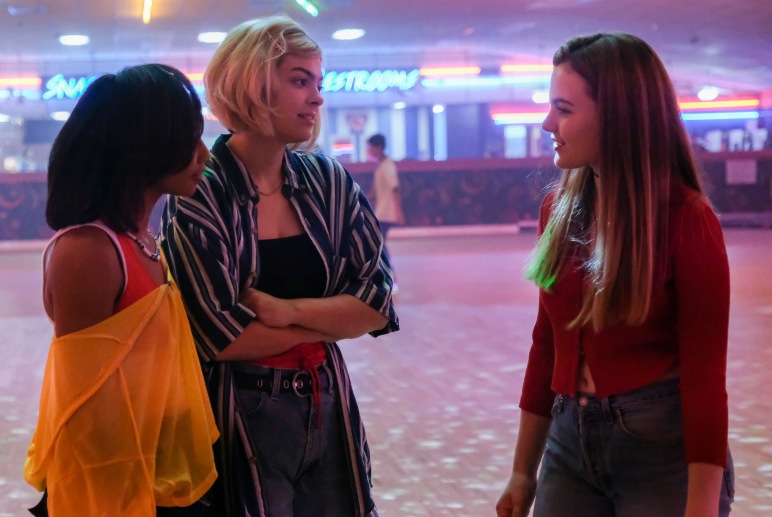 Since April, it’s been hard to open Twitter without having to dodge spoilers for Freeform’s latest summer mystery, Cruel Summer. The nineties-set puzzle box follows two teenage girls over a handful of years as one goes missing and the other climbs the social ladder to take her place, spinning a tantalizing web of questions and drawing in millions of viewers to discover what could have happened in the spaces between those fateful summers.

Caught in the middle of this web is Tennille Peterson, a part of the high school queen bee trio whose alliances shift as the mysteries unfold. TV Wasteland had the opportunity to sit down with rising actress Shelby Surdam (Tennille) to discuss the new series, being a part of another widely popular teen show, and how that type of programming can properly address hot social topics.

Surdam grew up in the theater world, and because of the safe space it had provided her from a young age, acting has become a sort of therapy for her. “It has really helped me become the person I am today.” Her first major role came in SKAM Austin, the American remake of the hugely popular Norwegian series. The original show has inspired nearly a dozen international versions, each focusing on unique teen experiences that all relate to universal themes of love and identity. Shelby praised the writers for incorporating topics like mental health, religion, and relationship issues (between both straight and gay characters) in such an honest way. While some adaptations are direct remakes of the Norwegian series, notably storylines of fan favorite characters Isak and Even, Shelby broke new ground with Kelsey, a self-conscious teen at Bouldin High School who is battling an eating disorder but begins to build her confidence by creating her own dance team. Surdam is “forever grateful for the experience [she] had with SKAM Austin.”

Leading the first attempt to bring the franchise stateside put a lot of weight on the cast and creators’ shoulders, especially in regards to depicting their corner of America to the rest of the world (who were sure to be tuning in every week), but Shelby expressed nothing but pride for the series, emphasizing their dedication to representing Austin, Texas in a realistic way. “Everything was set to where it felt like real time.” Facebook would release clips every day through their site (compiled on the weekends into full episodes), which along with posts from the characters’ real-life Instagram accounts, created the sense that the viewer was watching the events of the show play out like they were a part of their friends’ lives. “We just wanted it to feel as real as possible.” Surdam hopes that she can work with creator Julie Andem and the rest of the cast and crew again in the future.

Now, Shelby has just finished her run as Tennille in Cruel Summer. The unique setup of the show presents the tale of a Texas town over three consecutive summers, told concurrently so that the mysteries of what happened during the school year and why these characters have suddenly turned against each other or turned enemies into friends become that much more tantalizing. “You’re featuring teenagers throughout those years in their pivotal points, and they change so much.” As the series frequently shifts perspectives and scenes change based on who’s telling the story, “the audience’s loyalty shifts throughout the series… even throughout episodes.” Of course, the puzzle box aspects never distract from how the show tackles the same issues that high schoolers are always struggling with, like “trying to fit in, your first love, betrayal, bullying,” and the even darker experiences of grooming and abuse by teachers and administrators. One of the most hotly debated conversations surrounding these types of teen shows that do address the high school world in all of its honest ugliness is whether or not they are romanticizing these experiences. However, Surdam highlighted that Cruel Summer’s delicate handling of the issues avoids glamorization, instead focusing on the deep damage they can do to the young people thrust into those situations.

The constant jumps in time from 1993 to 1994 and 1995 necessitated not only frequent costume and set changes, but minute shifts in tone and performance as well, which became difficult when “we would have to film stuff for different years on the same day.” However, Shelby had a blast just living in that nineties space, listening to the music and interacting with the old technology like AOL that played such a significant role in the stories of the Texas teens. She praised stars Olivia Holt and Chiara Aurelia for navigating their dramatic physical and emotional transformations, especially as Aurelia would go from wallflower nerd to queen bee in the span of an afternoon. “I love Olivia. She’s so talented and she kills it every single time, but not only that, she is so kind and funny and just really down to earth.,” mentioning how the former Kickin’ It star would do impressions for the crew and lift everyone’s spirits after long shooting days.

While filming the pilot, Surdam got the opportunity to meet executive producer Jessica Biel, who she recalls being very “sweet and nice” and genuinely wanting to get to know everybody on set. “She asked me and Aaliyah [Muhammad] if we wanted to have lunch with her on set, and inside I was like freaking out… trying to remain calm.” Shelby’s other favorite days on set were the ones where everybody was gathered to shoot big scenes, like in the carnival episode because “we got to go on the rides and the bumper cars.” She also recalled shooting a scene later in the season that happened to land on Wacky Wednesday, and she loved seeing director Bill Purple in a bright red wig playing basketball with the cast. The majority of the series beyond the pilot was filmed in the midst of a pre-vaccine COVID world, but “luckily enough, we followed every safety guideline known to man… Honestly our makeup department looked like doctors.” Though working in the television world could be just as intimidating as any other during that time of uncertainty and never-ending hand sanitizer, Surdam felt incredibly safe between all of the protocols that Freeform enforced while shooting.

Since its April premiere, Cruel Summer has just exploded in popularity, attracting critical acclaim and spawning countless conversations and theories on social media, to a degree where opening Twitter the day after a new episode can be dangerous if you want to avoid spoilers. In fact, a couple days ago it was confirmed as Freeform’s most-watched series ever. While filming, Shelby had no idea how much people were going to love the show or “how much people would respond to it.” Just last month, she accompanied her sister to her hair appointment, where she overheard people discussing the show, not even knowing one of the stars was there with them. “It’s like a surreal feeling.” Surdam’s mother and sister regularly send her fan theories about the show because “they want to know so badly” what could end up unraveling, so Shelby has seen virtually every idea out there, but the craziest possibility she’s read was one that proposed that “Kate’s mom was in on it, and she knew that it was Marlene… I was like, ‘This is so wild.’”

In the future, Surdam hopes to keep following her passion and “hopefully expand [her] horizons behind the scenes.” She’s written a pilot about two teens who begin to explore a purgatory world after a car accident, and she hopes to continue developing that project in a writing or producing role. And with Cruel Summer’s recent renewal, we’re sure to see more Shelby Surdam in the very near future.