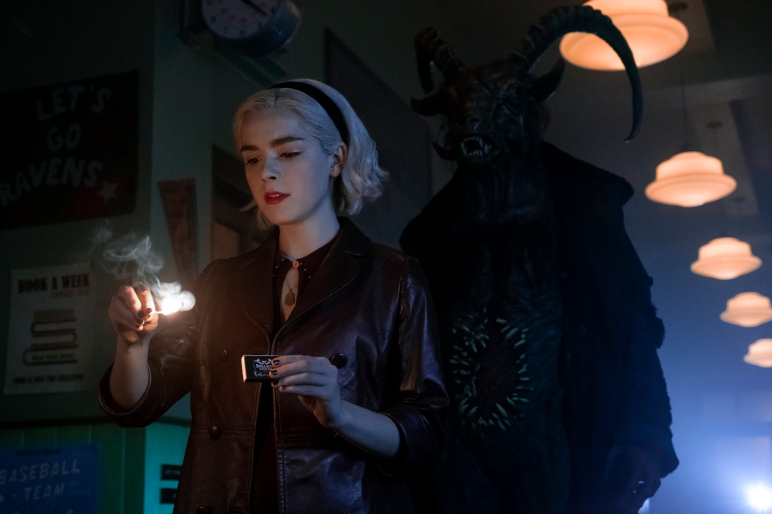 Ah, the twisted, adventurous, bigger, and badder sister of the 1996 sitcom, Sabrina The Teenage Witch, has come to a close with their fourth and final season on Netflix. Over the past couple years, many have grown to fall in love with the iconic characters in this show because how is anyone going to dislike a character portrayed by Kiernan Shipka? You can’t. One thing has been made clear over the past couple seasons, and it’s the fact that Sabrina is selfless, powerful, and obviously a catch. Although disappointed is an understatement for how I felt about the season finale, Spellman has a tight grip on my heart nonetheless.

In remembrance of Chilling Adventures of Sabrina coming to a close, this month’s TV Tracks article has taken a new approach: A special playlist with 13 songs that I believe would come very close to what Sabrina listens to on the daily. Containing lots of classics and a couple of songs directly from the CAOS soundtrack, the musical soul of the teenage witch will live on.

Here are my picks:

Starting off with a song used in season 4’s soundtrack, it was only fitting to include this bedroom party classic.

In my humble opinion, Sabrina is the very essence of this song. She encapsulates the wistful spirit of this song as a whole and she was probably in the music video too.

This song is the definition of her boyfriend, Nicholas Scratch.

Across the Universe- Fiona Apple

She’s gone to hell and back so it’s not a surprise that this song would be a part of her life.

Sabrina would definitely cry to this song because she has an extremely severe case of savior complex herself.

Similar to the context of this song, even though she is not a perfect character, there is so much love to give and she comes back to fix her mistakes every time.

To quote Radiohead, she will see you in the next life.

Dancing In The Dark- Lucy Dacus

Another classic song to play in her room while she dances with her sister, Sabrina Morningstar.

A sad song from Nick to Sabrina.

Basically the entire soundtrack to the last episode of season 4.

Cannot explain it, however I have such a strong inkling that Sabrina Spellman loves Gwen Stefani.

I Put a Spell on You- Nina Simone

For slow dancing with Nick and meditating before her self affirmations every morning.

To leave this playlist on a happy note, here is (what I believe) to be one of Sabrina’s favorites to sing and play with her band.