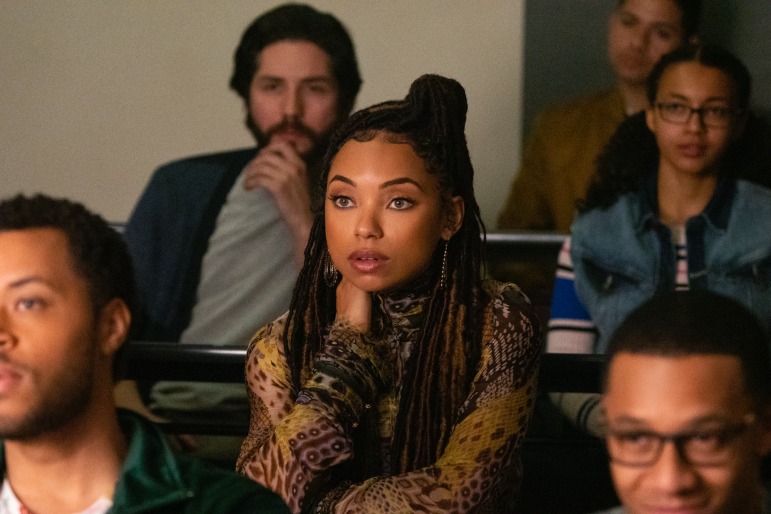 In honor of Black History Month, TV Wasteland has partnered with Orange County School of the Arts (OCSA)’s Black Student Union to compile a list of their top ten Black TV shows. Check out the list of shows and respective commentary below:

Happy Black History Month! Black History Month is not only a celebration of Black voices in our history books: it is a celebration of Black resilience and ingenuity in our present and future. This month, we want to help you celebrate by providing our top ten list of Black TV shows and miniseries, each one a small drop in the massive sea that is Black artwork and talent. We [the presidents of the Orange County School of the Arts’ Black Student Union] are so grateful to share our culture and history with you all!

By now, you probably have heard of Dear White People in some way, but it’s still a good one to start with. This show discusses racial tensions, police brutality, the whiteness of academia and the flaws of respectability politics. It follows the story of Samantha White, a Black student at a primarily white institution (PWI) who runs a radio show aimed at raising awareness for racial injustice on campus. Sam White struggles with her own sense of Blackness, interacial dating, and how to circumvent performative activism; through Sam, not only are we introduced to the nuance of Black identity, but the importance of resistance.

In this show produced by the mastermind Jordan Peele, the infamous stories of H.P. Lovecraft are turned on their head, combining the mythical with the realistic to tell the grotesque history of Jim Crow in the American South. By reimagining the work of Lovecraftian horror to problematize its eugenicists roots, Peele not only humanizes a people long since demonized by Western writers, but as well as allows them to be the protagonists of their own story. In a canon that has long ignored Black voices, Lovecraft Country cements the fact that Black people exist in the past, future, and present. It is by far, one of the best shows on modern television.

Produced by Ethan Hawke, The Good Lord Bird follows the journey of Henry “Little Onion” Shackleford as he flees enslavement. First as an award winning book by James McBride, The Good Lord bird tells the daring escapades of abolitionist and radical James Brown (credited for igniting the civil war) from the point of view of enslaved Black folks, centering their stories above those of the white characters. This show subverts the White Savior trope through comedy and drama; from Fredrick Douglass to Harriet Tubman all the way to Little Onion himself, Black people are the heroes of their own narrative, and the white folks hanging out are just along for the ride. Also, nothing beats watching Ethan Hawke act a fool on television while dressed as an 1800s cowboy.

It wouldn’t be Black History Month if we didn’t fan girl over Issa Rae! Created by Rae and Larry Willmore, Insecure examines contemporary Black womanhood, in and outside of the corporate office; the main character Issa struggles with romance, confidence, as well as misogynoir she faces at work. Not only is it a gut-punch of laughter every episode, but it examines the constant battle to balance work-life with love-life for fellow work-a-holics, and just what it means to be ‘insecure’.

Of course this one’s on the list! You didn’t think we’d leave Will Smith hanging, now, did you? The Fresh Prince of Bel-Air is a classic, telling the story of Will (West Philly born and raised and all that) as he enters a world of privilege and elitism when he moves to his aunt and uncle’s house in Bel-Air, California. Will confronts racism at his new boujee private school he attends with his cousins, as well as the classism he faces within his own family unit. To this day, it’s a fan favorite, and the cultural backing of many Black folks today.

If you’ve been on tik tok in any capacity, I’m sure you’ve heard the trending audio about “A Pimp Named Slickback” – well, this hilarious, raunchy show is where it’s from. Based on Aaron McGruder’s comic series of the same name, The Boondocks is a satirical show that simultaneously celebrates as well as criticizes Black culture of the 90s to early 2000s. The main characters each represent a strength as well as flaw of American society and it’s commodification of Black culture, and each episode provides new insight on systems of oppression that continue to disvalue Black lives.

While this list has tried to steer clear of shows that memorialize Black trauma, this show is a necessary watch for all those who claim to be struggling with why the phrase “Black Lives Matter” is not only necessary but urgent. Showing the false imprisonment of the 1989 Central Park Five and the weaponization of white fragility against Black men, When They See Us lays bare the cruelty of America’s justice system towards Black folks, as well as the flaws of our courts. Heart wrenching, tragic and enraging, this miniseries is a testament to the need for systemic change.

Dramatizing the life of kingpin Bumpy Johnson, this show written by Christ Brancato, Paul Eckstein and Moise Verneaux throws the audience into 1960s Harlem at the rise of the Civil Rights Movement and Malcolm X’s social revolution. The protagonist, Bumpy, fights to restore his neighborhood to its former glory after a decade of prison, and push back the Italian mob that is slowly encroaching on his home. Discussing race relations between the ethnic enclaves of New York and the Black Power Movement, this show is a fast paced crime drama that’ll get you hooked. It provides a new, sharp perspective on the 60s Civil Rights Movement, and its parallels to today’s.

A staple in every Black household, this show not only is filled with late 90s early 2000s nostalgia, but details the life of Black high schoolers as they navigate adulthood, race relations, sexuality and grief. Centered around the titular character, Moesha, struggles to find her identity after the death of her mother, and the introduction of her step mother into the household. While most of the show is light hearted and full of laughs, there are extremely tender moments in which Moesha begins to heal after her mother’s death, and grows into a well rounded woman.

There’s a high chance that you haven’t heard or seen this one yet, and that’s why we’ve saved it to close us out. Julia, first aired in 1968, for all intents and purposes seems like a lush slice-of-life show about a single woman and her child. However, while it received similar claims from critics at the time of its debut, it became famous as the first weekly show to spotlight a Black woman as the protagonist. Not only was the titular character groundbreaking for the time, but it provided an escape from the stereotypical roles Black women often found themselves in (nurses, nannies, cooks, maids, etc) and examined the mundane struggles of a single mother entering the world of dating. For many Black girls growing up in the late 60s, Julia was a window into life outside of the impending social upheavals of the time, and gave them a figure to look up to. Truly, Julia was a lesson in the importance of representation within television.

We hope this list has inspired you to seek out more Black stories, and we hope you’ve taken the time to appreciate the magic that is Black excellence in the world of cinema. As always, supporting Black folks this month (and every month) should go beyond consuming our media: we encourage you to support Black owned businesses, and those affected by the cold snaps in Texas (especially Houston, of which one of the BSU co-president’s family is from). Thank you for your continued allyship, and we’ll see y’all soon.